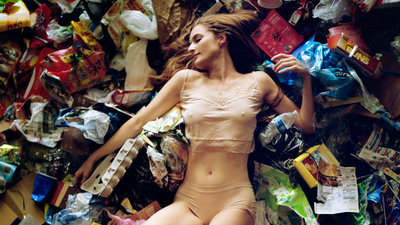 I am flummoxed by SHAPELESS. Its a film with a killer cast, an intriguing visual style and mood to burn, unfortunately the film has hopes of reframing the story of a woman with an eating disorder as a horror film or thriller and it runs out of steam very early
The plot of the film is simple: Ivy is a young woman working various jobs by day and singing in lounges by night. She is also struggling with an eating disorder.
The trouble is that the filmmakers paint the film in shades that make the film seem as if it were a horror film. The dark colors and moody angles and shapeless images seem to herald that we are going into terrifying territory. Watching the film, especially when the film has been programmed in the Tribeca Midnight section, it feel like the film is going to take some horrific turn, as death and destruction, and instead we simply travel with Ivy as she tries to fight and tries to hide her disorder. Outside of the horror of the disease itself , there is nothing horrifying here even if the director  is desperately trying to make us think there is.
I got about twenty minutes in and I began to wonder where this was going to go. Then at the halfway point I realized that this wasn't going to go anywhere special and I lost interest. While the film making is remains first rate there isn't enough here, at least when framed as a horror film to  make this worth sitting through. This should have been a straight drama, with an occasional flourish.
And I'm still tying to sort out why this is in the midnight section. Actually I know why, the look and feel of the film makes this seem like a horror film. Actually it seems more like a horror film than many recent horror films, unfortunately it really doesn't have a pay off.
I was disappointed, more so when I realized that Ivy is kind of short changed  in the interest of mood and a desire to serve an idea that just doesn't really work.
A miss.
Posted by Steve Kopian at June 14, 2021