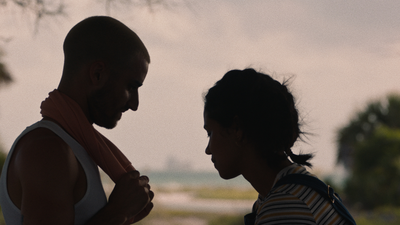 Rosie young musician, recently graduated from high school falls hard for a roguish Jules from New York. Their lives become complicated by Brandon, a recently released convict from the wrong side of town.

The story is good but it isn’t what is important here. What is important here is two things, the cast, which is so good that you really won’t care about the story as such, all you will care about is the characters, who are so vividly portrayed that they are now people. I loved the performances so much that I couldn’t believe that Brandon was played by writer director Tyler Riggs. I say this not as a knock, rather to simply illustrate the fact that I couldn’t believe that RIggs wrote and directed the film. There was a complete disconnect.

And speaking of Mr. Riggs, start polishing this man’s Oscar. While I don’t think he will get one for GOD'S WAITING ROOM, it's too small a film, but I am pretty certain that given time and the right script he will be going on stage for an Oscar. I don’t say this lightly. I say this because watching  the film, watching the craft of the film, the shot choice, the editing, the performances that he elicits,  I was stunned.  There is a beauty and power to it all. There is more importantly there is a magic that transports us to a place we’ve never been.  This is filmmaking at the highest level and kick ass calling card. How kick ass? There is a sequence at the end of the film that I replayed three or four times because I was floored by it and I wanted to see how it was put together. (I can’t say what it is because it involves a major plot point)

If you love movies, if you want to know where they are going then you need to see GOD'S WAITING ROOM since it will introduce you to a director who is going to shake things up, very shortly