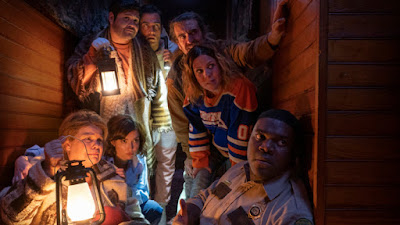 A new forest ranger arrives at his new post in the mountains to discover the town is crazy, split over a possible gas pipeline and being hunted by a werewolf.

Uneasy mix of comedy, mystery and horror never quite comes together. While the film has some great, if overly broad characters and is frequently funny in a low brow way the chills and scares never really materialize. Blame it on the desire to keep the jokes  coming fast and furious. Everything is funny, with the result nothing is scary. It didn't help that the werewolf attacks are staged in such away that the monster is never seen until the final moments and done in such away that they don't look real.

While I made it through to the end, thanks to the film keeping the identity of the werewolf a secret, the final payoff  left me scratching my head since the revelation of who it is doesn't seem to work. On the other hand I don't think anyone could have been the monster since I think we see everyone with other people during one or more of the attacks.

While never bad, it never quite comes together with the result I was disappointed.