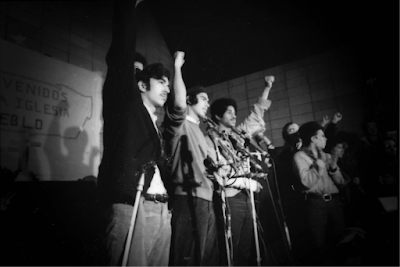 TAKEOVER is the story of what happened when the Young Lords took over Lincoln Hospital in the South Bronx for 12 hours on July 14 1971. The hospital was being neglected with the result being that the patients it was serving were dying. It was a symbol of the disrespect that the Puerto Ricans were shown by the city and state. It was a move that rattled cages and resulted in change.
Very good look at an event that most people don't know that happened. Using a mix of recreation, new interviews and archival footage the film takes back 50 years to put us in the middle of events. The film is also a very good primer on the history the Young Lords and the prejudice that spawned them.
While there has been other tellings of the tale, all of them have been tied to other events as well (the recent DOPE IS DEATH follows events well past the end of the take over). This is the first film I've seen that focused just on the 12 hours with the result there is more detail given to events and we get a better understanding of things. I was impressed.
I really liked this film a great deal and recommend it.
Posted by Steve Kopian at June 12, 2021