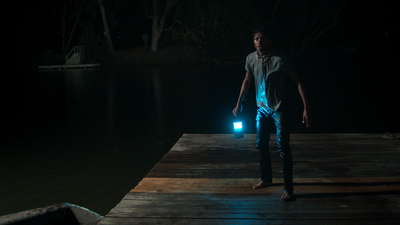 I have a tendency to watch Tribeca films blind. Since so many films are world premieres and because so many have write ups that aren't spot on I triage the slate, cross off anything that isn't something I really want to see and then watch the rest blind- with no expectations other than a film sounded interesting.

Such was the case I had watching NO RUNNING. I went in with no idea what it was other than a thriller and it was part of Tribeca's Juneteenth sidebar--and not long into it I was wondering what in the hell I was missing because the film was skidding into, for me at least, totally unexpected territory.

The plot of the film has black teen Jayden running into problems when a friend disappears. The cops think he had something to do with it, Jayden knows it wasn't him and has suspicions as to what may have happened and it's not of this earth.

This film rattles you. I've seen it twice now and I'm floored by, the first time because it was unexpected and the second time because director Delmar Washington has made a film that mixes a social justice drama with science fiction. What I mean by that is that he has made a film where we have real people in real situations suddenly facing something fantastic. Magnificently instead of Spielberg  sugar, Washington gives us real world racism in a world where something is out there. We get a poke in the eye and we get unsettling revelations.

As I said I'm floored, because Washinton has created  the rare modern science fiction or horror film to use fantastic subjects to take real world issues apart and keep it all grounded in reality. I absolutely love about this film is that vey often it doesn't feel like a science fiction film. Or if it does it doesn't feel like typical Hollywood, Steven Spielberg-esque film. This is very close to reality, even the science fiction isn't overly flashy with the result that it is much more visceral and much more disturbing.

I was moved and frightened.

This is a great little film and definitely a must see.