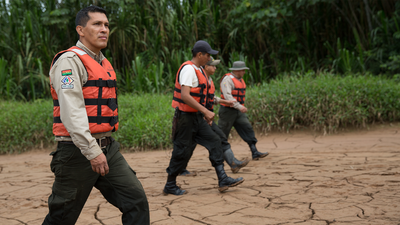 Tiger Gente focuses on Marcos Uzquiano, the director of the national park. Marcos is risking his life in order to protect the jaguars. He believes the jaguars are his family, they are a part of him and he made a promise to protect them until he dies.  It is truly admirable. He and his team of rangers spend their time trying to track down the hunters and sellers.

The film also focuses on journalist Laurel Chor, who is investigating the wildlife trade. She too is risking her life by doing this. She wants to get to the bottom of why they are selling jaguar teeth in China & Myanmar.  She also has a unique perspective since she herself is Chinese, and she "interviews" her family about the illegal wildlife trade in China and its connection to Chinese medicine.

Tiger Gente is a real eye opener.  I'm familiar with poaching elephants and rhinos, but I wasn't aware that people were also poaching jaguars(& tigers) for their teeth. I was worried going into this that there would be graphic images or videos, but fortunately there aren't.(The images of the jaguars in the wild are stunning)

I hope this documentary brings awareness and helps to stop the illegal trade before it gets even worse.