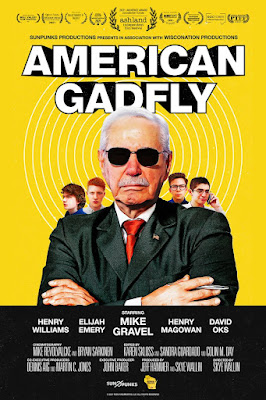 American Gadfly is the story of a group of teenagers who convince one time Presidential candidate Mike Gravel to make a run for the Oval Office. They don’t expect him to win, all they are looking for is to get him enough support and coverage so that he will end up in the mix at the debates and thus force the discussion toward the left. More to the point since Gravel wasn’t expected to win he could do and say what he wanted since it wasn’t going to come back to haunt the campaign

Solid doc is a hopeful exploration of what grassroots movements can do. Yea Gravel didn’t make it that far but he did get noticed and was brought into the mix for a brief time forcing a discussion of some issues that might not have been noticed.

If there is any down side to the film its that outside of the subject matter the film doesn’t do anything and it comes off as very good but run of the mill political doc.

That said it’s worth a look.