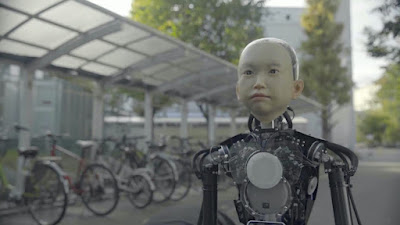 Director Ann Shin looks at efforts to extend life via transhuman mean in otherwords a mixing of human and electronics. The idea is either to put our consciousness into an electronic body or to create a simulation of ourselves that will live on

I am exactly the wrong audience for this film.  I say that not for philosophical reasons but rather because every year thanks to covering dozens of film fests and hundreds of movies I see at least three or four similar films every year. Film makers love the extension of life as a subject matter.

As introductions to the subject go this film isn't bad. It is a great primer on the subject that gives you a good base to work from. However running a brief 75 minutes the film isn't detailed. There are a lot of questions that it might kick up that it doesn't answer, largely because the film doesn't want to fly off on a tangent. Frankly I would be curious if there is a longer, messier cut that delves into things in a more detailed way.

Hitting Google TV, Apple TV, Vudu and In Demand today, its worth a look for the curious.