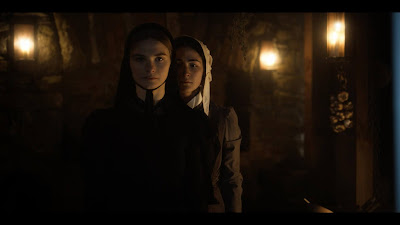 Set in  1843 in Southhold New York THE LAST THING MARY SAW is the story of what happens in the wake of young woman being found with a maid. As the puritanical authorities try to sort out the devil' role in all of this, the two women try to survive.

A couple of friends covering Fantasia told me I had to see this. They loved the film. I am telling you this because I know their reaction played into my feelings for the film.  While I liked the film I didn't love it. The reason is it is vey deliberately paced. There is no music and scenes seem to play out in real time. Its exactly the sort of film you need to see in a theater where there are no distractions.

My reservations aside this is a solid film. I love the choice not to have major stars in it. Yes Rory Culkin is in it but he blends in nicely. Its a film that looks and feels like it was filmed two hundred years ago. The story is compelling and it allows us to see the era in a completely different light.