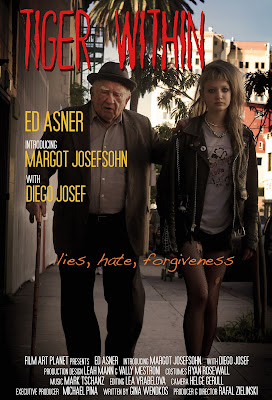 14 year old Cassie doesn't fit in anywhere. She leaves her mother's home and heads to LA to see/stay with her dad and his new family but that doesn't work. She ends up on the street where she meets Samuel an elderly man who seems to like everyone. Despite Cassie wearing a swastika and claiming to hate Jews Samuel takes her in. A friendship forms.

Once you get past the set up and if you can ignore the well worn course it takes to the expected ending TIGER WITHIN is actually a pretty good film. I know that sounds like faint praise but the core of the film, the the relationship between Cassie and Samuel really sings.

Let me get the the problems out of the way, which is basically the set up of Cassie not getting along with her mother's abusive boyfriend, and the ending (I'm not telling but you can guess)  We've been here any thousand or so times before and it takes the edge off everything. The set up to the outsider nature of Cassie is really strange, I mean she gets tossed out of her first class? She also seems to be several years older than 14. It's not fatal to the film but it keeps us at a distance until Cassie meets Samuel.

The core of the film is the interplay between Cassie and Samuel. Played by new comer Margot Josefson and Ed Asner, the pair make an interesting combination of friends. To be certain there are some expected facets to the pair, but the chemistry between them wipe away any reservations. Frankly they are so good together and the scenes are so alive that everything else pales in comparison.

While not a perfect film TIGER WITHIN is worth a look for the work of the two leads.