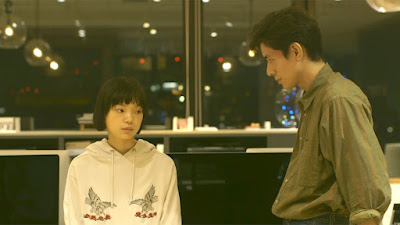 The first story is the story of two friends, one of which who is afraid to tell the other that she is dating her friends ex. The second story has a student attempting to get revenge on a professor who flunked a friend, and it spinning out unexpectedly. The third tale involves a life returning to a post internet world after a virus changes things.

Told in Hamaguchi’s typical long takes the film is full of observations and moments we don’t get in anyone else’s films. The fact that he allows the scenes to play out longer than most other filmmakers means that he is trying to reach the truth beyond the mass market bullet point. Life isn’t in declarative statements but in the smaller moments, and by revealing those Hamaguchi gives us something greater.

How much greater is shown by the fact that where other films of this sort leave the audience walking out talking about how this story is better than that one. In WHEEL we walked out of the film feeling as though we saw not three stories but one. I was talking to some one right after the film and I realized I was speaking about it in terms of a whole film.

This is a wonderful film. While not a film that I had at the top of my list going into the New York Film Fest, it is coming out.