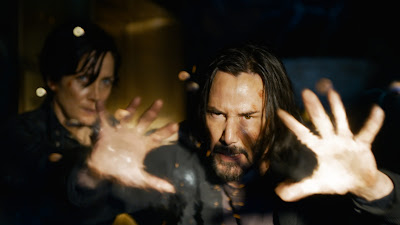 This  return to the Matrix is the best film since the first film. And if you can accept it's silliness on it's own terms its a fun ride

The plot has Neo back into the Matrix unaware of who he is, He's made a video game of the first films unaware that it's autobiograpy. He is miserable and not sure why. He is pulled out of the Matrix by freedom fighters who want him to help imrove the wrld. All he wants to do is find Trinity. THe machines don't want that since the pair together means mad things will happen.

Meta reimagining and rethinking of the saga largely works. This is at times a rip roaring thrill ride  that pays homage to the saga and pushes things forward. I had a good time.

Of course there are problems, partly from the fact at this point much of the fireworks looks old hat since the originl films have been ripped off so much. The plot also doesn't make much sense such as why Neo is in the Matrix again being kind of rushed past.

I have severe problems with the philosophy of the world and keep wanting to raise my hand and ask thorny questions about the way things work. I was giggling through a great deal of the explanations. Admittedly my giggling comes from the fact that I know several people who have declared there is no god and have disassembled religion and instead favor of a belief we are in a simulation straight out of the matrix. The Matrix and the trains of thought it unleashed on the world are their religions despite the train of thought having as much trouble as any other major religion.

On a more practical level the plot does some stupid ass things like the Matrix turning people into bombs to attack Neo and Trinty when I would think they could just create things to do the same thing (and of course we're left to wonder about the plot threads of all the people who jump out windows). I frankly would have liked it if we didn't get a film that resorted to zombie hordes.

But I'm over thinking which is something you can't so with this film lest it breaks apart.

Ultimately this is worth a look,

The trick with enjoying this film is looking past the nonsense and just going ith it.