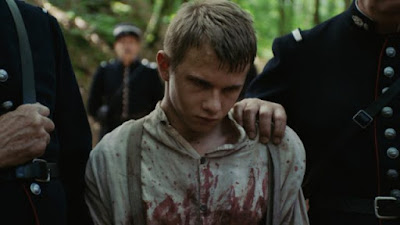 Bruno Reidel is being sold as the story of a panel trying to determine if a 17 year old seminary student is sane enough to stand trial for murder. The law concerning such matters and the connection between church and state had recently changed and this was the first encounter with an actual case and the law. The film is actually more a recounting of the young man’s life.

This extremely well made and well acted film isn’t as compelling as one would have hoped. The problem is that the film is really just the story of Reidel. There is nothing wrong with that except that it’s the story of an abused young man who is filled with dark thoughts and Catholic guilt.  Yes it’s a brilliant telling of the young man’s story but I don’t know why we are being told it. What am I supposed to get from it? I don’t know.  I’m sure that greater minds than me can find some deeper themes but there are so many factors going into it I can’t find anything universal about it.

Worth a look for the craft or if you like bleak tales of life, but for no other reason.