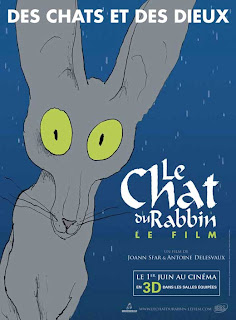 Animated film from Joann Sfar is based upon his graphic novel.

The film is the story of the rabbi's cat who begins to talk after eating a parrot, who then helps the rabbi pass a French exam before heading off on a journey across Africa looking for a city called Jerusalem.

This great looking film truly is the comic come to life (director Sfar refused to let anyone film his comic until he did it himself). Its an amazing living and breathing work of cinematic art that really should be seen in on the big screen...

...but not in 3D. The brilliant colors are completely washed out by the glasses making the eye popping colors turn to mud. I have no idea why 3D was used, other than for marketing, since it only adds minimally to the films sense of space. Its a lessening of all that is beautiful in the film.

The film outside of the 3D is a really good. Its a grand adventure about how we all are ultimately the same. Its a point driven home as we see all of the various people across Africa saying terrible things, the SAME terrible things, about each other.

The film also takes some of the piss out of Tintin who shows up briefly as a know it all, and overly talkative journalist.

I like the film a great deal. While it may ramble all over the place in the second half, it always remains engaging and entertaining. Actually my only serious complaint is that the film doesn't end so much as stop. My reaction when it ended was more or less, that's the end? Why not either sooner or a little later?. I can't really explain since you won't know what I'm talking about until you see the film.

A word of warning. The film is being billed as a family film. Its fine for older kids, but little ones (or more likely their parents), assuming they can read the subtitles, maybe upset by the graphic bloody violence, inferences of sex and the lack of shying away from real talk and actions. There is nothing wrong with any of it, it's just that some parents are overly protective and easily upset when cartoons turn out not to be juvenile as they think they are. 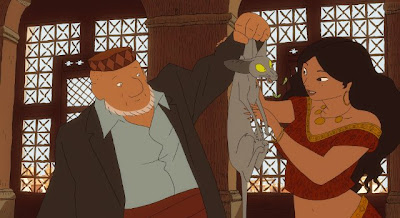