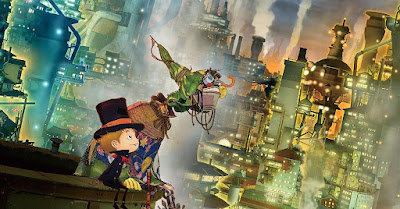 In a world called Chimney Town things are tightly controlled by the inquisitors. No one is to know anything except what they tell them. Stories of life outside the town and star above the smoke are forbidden.  When young Lubicchi makes friends with Poupelle, a man made of garbage, they decide to see if the story of stars is true.

This visually stunning animated film is a must see on a big screen. This is a film that will make even the most jaded animation lover’s jaw hang open at some point. I want, nay I need to see this big so I can really see the wonders.

The basic plot about a boy, his friend and de facto father figure, is a deeply moving one. This dystopian tale has a great sense of place and character that makes the whole place real. It’s a film that plays our heart strings in the best sort of a way. You will be like me, and want to see it again for the characters as well as the visuals.

You will also want to see this film for the philosophical, religious and political threads running through the film. Rarely have there been a finely sketched portrait of an evil regime in a film like this

In its way this is one of the most magical animated films of the year.

If there is any problem with the film is that there are several sequences that go on way too long. However it’s not so much that they are too long but rather they are derivative. In a film that is often brilliantly its own thing, it often resorts to sequences such as the mine car ride, that have been done to death elsewhere. Its not that the sequences are bad, but old hat .

Despite the bumps this film is magical. I laughed, I cried I said wow a whole lot.