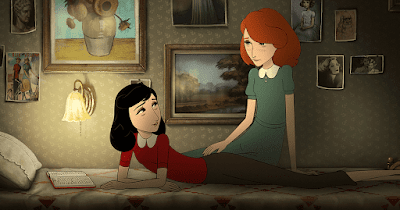 Ari Folman's look at Anne Frank and her legacy is an incredibly messy film. It has moments of great power but it is trying to do too much and ends up disappointing.
The plot of the film had Kitty, the fictional person Anne spoke to in her diary entries, coming to life a year from now and trying to find her friend. The trouble is while she is in the Anne Frank Museum she is invisible however outside, when she has the diary with her, she is a real person who ends up sort of romancing a pickpocket she saw at the museum, and becoming involved with refugees in Amsterdam. (And there are flashbacks to the war where Anne and Kitty talk)
Yes it is as messy as it sounds.
While I can admire what the film is trying to do I don't think it really achieves most of what it was hoping to do. It simply has too many plot lines ging at the same time with the result that nothing is really explored. The refugees pop in and out, but we don't get to know them, they are kept at arms length. Mostly Folman assumes we know about their plight until a late in the game revelation that they were fleeing war.It's simple a general idea place holder. The pickpocket is there and not and there again. Even Anne Frank's story is given the short end of the stick because the film assumes you know all about Anne, and the war and what happened. As a result we get a highlighted version (kind of) of her story that is just random moments.
At the same time the film is hypercritical of the cult of Anne Frank and how she is everything with so many places named for her. The film takes everyone to task for the reverence shown her, arguing in the end that we should be treating her story as something different than a tourist destination and a way to name things, however the film never fully explains what that is. Lrd knows it tries but it never fully puts it over.
While it could be argued that the film is Kitty's story, even that is all over the place with the idea that she's imaginary, but real, and that she can travel in time but is here now being narratively messy. The rules for her existence seem to be made up on the fly or what a sequence needs to have happen. Even the romance with the pickpocket doesn't fully work because of its on again off again nature.
There are things that work, the scene where Kitty goes shopping is great. The Nazi's, riffed from the classic Alexander Nevsky are meancing (though I'm not sure we need the Battle on the Ice from Eisentstein's film refought with Anne's version of Ready Player One). The romance, when it is the focus, is great and magical. Truthfully the pickpocket is the best drawn of all the characters, including Anne and her family.
Apologies, this is a hard film to write about because while it's not bad its such a mess on so many levels I just want to pull it apart scene by scene.
A disappointing miss. 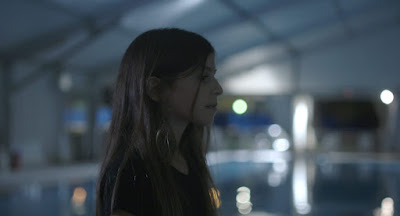 I should mention that the film played with a short called NAOMI about four girls who go into a swimming pool after hours. It's well made and well acted, but it feels like part of something else and doesn't add up to much. It needs to be a feature film
Posted by Steve Kopian at March 05, 2022