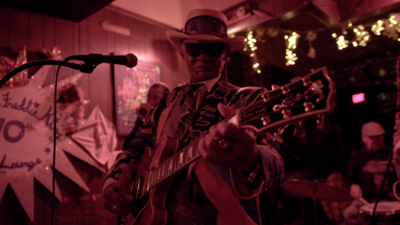 I love Music Pictures New Orleans. It is vibrant and alive.  It’s a wonderful look at the city of New Orleans through the music. We get portraits of  Irma Thomas, Little Freddie King, Ellis Marsalis, and The Tremé Brass Band.

Divided into four sections covering each of the subjects, the film just drops us into the lives of some really great people and makes us fall in love with them. Not only is the music that they make magnificent but they all come across as wonderful people. They are all the sort of people you want to pull up a chair next to and start to ask them questions about their lives and music. As great as the portraits are it’s clear that there could be a longer film about each of them and their love of the city.

I really don’t know what to say about this film except I love it. Forgive me some films are like that. This is one of those films where you go through it and put it on a second time because you’re having a grand old time. It’s the sort of film that has you scrabbling to the internet in order to track down the music of the people profiled. It has you cursing that you chose to watch the film at home and not go to the world premiere at Tribeca where Irma Thomas, Little Freddie King & Jason Marsalis played a concert after the film. And it is a film that has you checking the airlines looking for cheap flights so you can fly to New Orleans to see what other musical wonders are in the city.

Yea, I know that isn’t a deeply reasoned review of the film, but to my mind that’s okay since the film is ultimately a film about an emotion, a love of a city and it’s music so the only way to respond is not with brainy ideas but with a similar motion.

Music Pictures New Orleans is a blast and should be seen