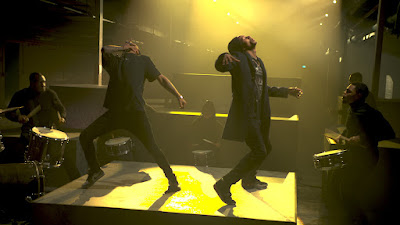 One of my favorite films of the year is on one of my favorite pair of performers, the Nicholas Brothers. Dancers with no equal they have influenced everyone who followed them. They are especially influential in break dancing and hip hop. The film discusses the Brothers and their legacy while the duo Les Brothers prepare to do a version of the dance in Stormy Weather.

Belt in, sit back and get ready to be wowed as the past and present collide in a magnificent love song to two brothers who changed the world as we know it. You may not think it now but watch Savion Glover and the other people in this film speak and you will see the world change before your eyes.  I was in genuine awe- more so when you realize they just went and did the Stormy Weather dance on one take with no choreography- they just made it up.

I have no words

If you love film or dance you MUST see this film.