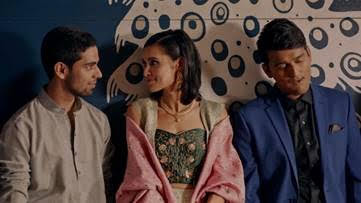 College student Alia returns home from school where she was a student activist, back to her privileged life. As she drifts from party to party were everyone gossips and puts on a show, she falls for the son of the owners of the local Indian supermarket.  Things begin to become complicated when Alia discovers that her mother and her new beau's mother knew each other long ago.

I liked INDIA SWEETS AND SPICES. I really liked the films examination of the patriarchal set up of Indian society and how that has carried over into the ex-pat community. I like the look at how hidden secrets of the past potentially can cause troubles in the present. I loved the cast and I loved the story...

…on the other hand I have issues with the presentation.

The opening sequence at Alia's college is unremarkable (and badly drunk acted)  to the point I was considering turning the film off. I'm glad I didn't because once the film gets going it's actually quite good. The real problem for me is that as good as the central story is, the whole thing is wrapped in a very Hollywood presentation. It feels like they are trying very hard to make a Lifetime movie of the week instead of one with it's own voice or flavor.  In some ways it almost feels like you could remove the

Understand that I am nitpicking, not because I dislike the film, rather because I liked the film a great deal but I actually wanted to love it.

Ultimately this is a good film and worth a look.

Email ThisBlogThis!Share to TwitterShare to FacebookShare to Pinterest
Labels: tribeca 2021