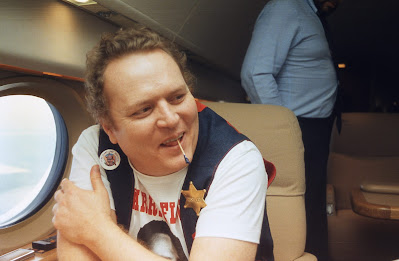 When Larry Flynt decided to run for President in 1983 a film crew was given the task of following his bid. As things went along the project ended up bein abandoned and  was only recently put together. The film World Premiered earlier tonight and in these crazy times it's a must see.

Okay first up if course  and frank language offends or you are upset by nudity or depictions of sex stay away. I know that is a given for most people but I'm guessing some people don't know who Larry Flynt was or what he did. So I'm giving them fair warning.

However in 1983 Flynt was considered a danger by many. He was a well spoken man who made his money printing sexually graphic pictures of  women. He also ran jokes that poked poked fun at people like Jerry Falwell (the whole affair is recounted here) and investigated corruption in high places. In the wake of getting shot and paralyzed Falwell ran for President,  He wanted to rattle the cages of Washington and he did so.

LARRY FLYNT FOR PRESIDENT recounts the whole affair. Made up of footage shot during the campaign, as well as news footage from the period, and interviews from now and then (Frank Zappa frequently shows up as a talking head) it is a film that is way more serious than I expected and much better than I had hoped.

To be honest going in I thought the film was going to be slightly jokey. Flynt frequently got away with poking people by mixing humor in his discussion.  I remember seeing dozens of interviews where he would seem clownish and disarm an interviewer only to turn and nail home point after point about the ways of the world and the need to fight for freedom. He usually won any discussion because he was better educated on the facts than those he was talking to.  While the film shows us the jokey side of Flynt it also highlights how serious he was about freedom. He was speaking out because he knew that the Republicans and  Right would move to take away whatever freedoms they could. The result is this is a very serious film about a time that mirrors our own.

The mirroring of our times and unspoken connections to the Far Right and Trumpism is going to annoy some. However consider that Flynt never stopped fighting and saw Trump as a danger (he offered a reward for evidence that could get Trump Impeached).  Also sure to annoy some is the fact that it doesn't tell the whole story concerning Flynt, however this isn't that sort of a film.

This is a great film