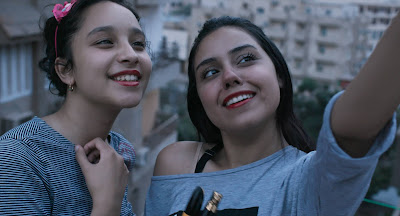 Souad is 19 year old girl living in a strict religious house.  She makes up an imaginary life for herself which she tells to strangers on the bus. She is another person with her friends, bold and brash. At home she is a good little girl except when she can sneak a smoke on the balcony or interact on social media while in her room. She is idolized by her young sister. When tragedy strikes her sister and Souad’s boyfriend try to sort out what happened.

Slow building and unfolding like an onion, Souad the film requires you to be patient with its story telling.  It is a quiet tale where what isn’t said and what isn’t seen is equally as important as what is. I say that as a warning since I  looked away for a moment and missed the turning point for the film and had to back things up to see what happened off screen.

Souad is a beautifully acted film. It is film with a largely unprofessional cast who make us believe that they really are the characters. I kept wondering how close to a true story is this. More importantly I wanted to sit and talk with them.0

Personally I like the film, but I know if I had not been ready for it’s low key and unspoken nature I would have had a hard time getting through it. I say this because I want the right audience to find this film. I hate the thought that people will go in and dismiss it for the wrong reason. You need to know what you are getting.

Worth a look for a patient audience