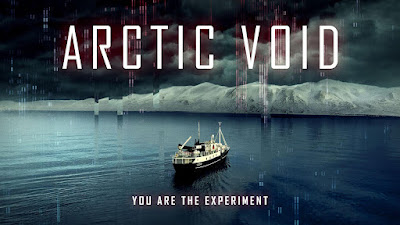 Traveling to a town in the artic where they are going to hop on a boat to shoot a documentary, two friends hook up with a camera man for a leisurely trip. Things turn bad quickly as suddenly everyone on board except the trio disappears and when they return to the village they find it deserted as well.

Solid thriller works thanks to a great cast and great filmmaking. Its a film that held my attention despite my suspecting where the film was going to go.

And before you jump to any conclusions I need to explain that last statement and say that the promotional material I received for the film revealed the whole plot. Normally I wouldn't mention that but the revelations shifted my feelings for the film from loving it to just liking it. Had I not known what was going on going it I would have loved this.

Assuming you can go in blind, ARCTIC VOID is a tense thriller with scifi and horror over tones. Its a film that keeps you guessing and wondering where it is going to go.