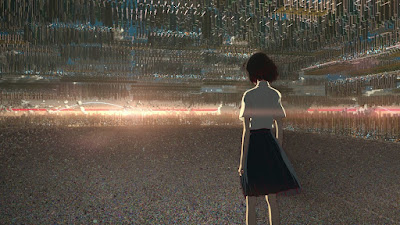 Mamoru Hosoda's BELLE is his messiest film narratively. There are really problems with how things play out. That said the film absolutely reduced me me to a sobbing mess at times. Intellectually I am not a fan, emotionally I want to disappear into it and never come back.
The plot involves a young girl named Suzu who signs up with an on-line world called "U". The program creates an avatar for you in the world. Hidden behind her avatar Belle, Suzu begins to sing, something she has not been able to do since her mother died. Becoming a superstar she is drama to a super fighter called Beast. As the film goes on Suzu has to navigate the real world and the on-line.
The look of the film is stunning. Its one of the few recent films I have seen that MUST be seen on a big screen. I say this because much of the on line  world is so jam packed with details you can only see it all on a big screen. Trust me seeing this really big will blow you mind.
The music, especially the songs, is Some of the best I've ever heard in a film. The music carries a great deal of weight and drive the emotion. The marriage of song and image crushed me to the point of tears. The best thing I can say is it is as good as anything that Yoko Kano has ever written.(Kano is the greatest writer of cinema songs in my book)
The problem with the film is that the narrative  is too complicated. There is way too much  going on and things are not always explained. Really for the first time in his career Hosoda is asking us to just go with him and not ask questions. But as magnificent as the film is when its firing, somethings can't be over looked, and questions remain.
It begins with the computer world "U". Its not really thought out. It just sort of is there. What is it exactly? We really don't know. We don't know the rules. There is talk of being able to make money fleetingly, but it never really comes into play. We don't know how it works since there are ear pod like things, but there is also the use of typical screens. There is talk of  people being able to do things, say fighting but there is no sense of what that is.
A number of plot threads are tangled. Within the whole Suzu real world story where so much is hinted at but not explained. We have the "U" plot line of Belle becoming a superstar suddenly its not really explained. The the Beauty and the Beast plot line isn't seamlessly integrated (despite bringing us to tears). Themes of loss, child abuse,  what its like to be a teen, friendship , families and a dozen other things are all there but dealt with in various degrees of success.
Walking out of the NYFF screening I told Hubert Vigilla that as much as I love the film I can rip it apart because there are so many problems.
And despite the problems I loved this film.
The film is beautiful beyond words.  There are moments that are truly wondrous.
Sequences move you. The song sequences are pure emotion. Only an insane man would dare take on Disney's animated Beauty and the Beast, but some how Hosoda's take is even more glorious than the original.
There are little bits of animated acting that are as good as real actors. Watch the facial expressions of Beast when he hugs Belle. at the end of the "dance". Another glorious piece in the train station confession scene. Yes its a bit goody but it is so on point you will want to scream "YES!" reaptedly
The film's portrait of love and longing is magnificent. We feel everyone's longing, Couple it with the songs and music and you have a deeply moving film... that is flipped becase you realize in the end this is not a love story but a quest for self and human connection.
On a technical level this is one of the most amazing animated films I've ever seen. Until you see this on a big screen and see the depth and detail of all the images in both the on line and real world you will not see a film that is one of the great films of the last few decades, if not ever.
I know the film is flawed but what worked distracted me and I ended up a big huge ball of mush. I cried multiple times because I could see what the film as going for and went with it, because the emotional truth the film was portraying was greater than any flaw.
Frankly I don't care what this film does wrong when it makes me feel this good.
If you can accept this film for what it is, you will have a new favorite film that will make you feel glorious.
Highly recommended. 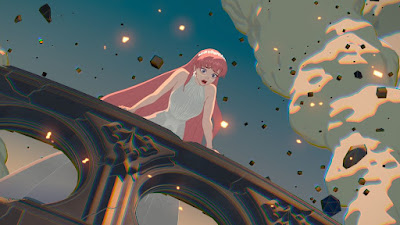