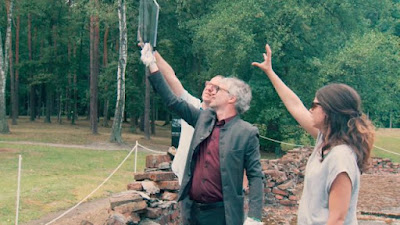 FROM WHERE THEY STOOD was at the top of my must see list for this year’s New York Jewish Film Festival. I extremely interested in seeing the story of the people who risked their lives to take pictures inside of the concentration camps and get them out to the world. It was a story I hadn’t really heard about before and wanted to know more. Sadly this film kind of bored me to the point of sleep.

The problem with the film is not the subject matter, which is extremely interesting, rather it’s the presentation which is slow and dull and full of a lot of silences and quiet passages. While I understand the need for some form of reverence this film is too reverent.

The majority of the film involves the filmmakers looking at the photographs and then trying to locate where they were taken. While this results in some intriguing moments when  we look through the slides into the camp and see the filmmakers walking around in the pictures, there aren’t enough of them to hold our interest. Perhaps if there were less meditative shots of the  trees or rain. I would have liked some discussion where people actually spoke to each other and put things into context outside of the camps or archives. The discussions here are fine but I want to know more but the way the material is presented here way too much is left unsaid

Worth a look for those curious , but as for me I’m going to try and find a book on the subject and read that.