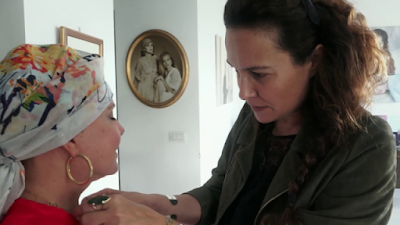 Portrait of a mother by her daughter as actress Yaël Abecassis turns the camera on her mother singer Raymonde El Bidaouia with magical results.
Bidaouia has spent the last half century performing Judeo-Arabic music to everyone bridging the gap between cultures as she waded into songs from all cultures that helped he express her self.A fighter for women's rights she lived life on her own terms refusing to change the way she spoke  and insisting on raiding her daughter alone after her husband was killed in an accident.
Simply put, she is a hell of a woman and this film is a hell of a portrait. Watching the film I was instantly struck by the notion that I really would lve to see her perform live. She truly connects to her audience as we see he performing in the center of  crowds and the top of tables.
If I have any quibble it's a problem with me and that is I do not have enough background to fully appreciate all the musical things that she is doing. I don't understand all of the places she's pulling from so I felt a bit lost with some of the discussions. That said I learned enough that I wanted to know more and as soon as the film ended I took my notebook and began look up the things I didn't know.
Highly recommended RAYMONDE EL BIDAOIA plays NYJFF as in in person title January 18
Posted by Steve Kopian at January 15, 2022