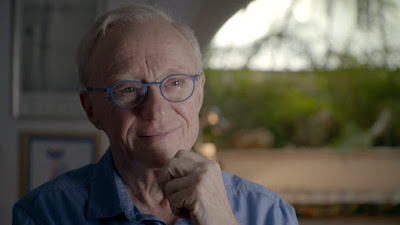 Grossman is a portrait of writer David Grossman as works on translation  of one of his novels and continues to struggle with the death of his son in 2006 when he was killed by an anti-tank rocket.

You will forgive me if I don’t say a great deal about this film. It’s not that the film is bad, rather it kicked me to the curb. Its not that it reveals anything big and shocking rather this film puts us into the head and heart of Mr Grossman. Listening him speak and explain his life and feelings over an hour shifts out head space. We are not wherever we are watching the film, but rather inside some one else.  I was not prepared for the emotional wave that this would produce

This is a great film. Not only because it gives us an up close and personal look at the man himself but also because his discussions give us a great insight into writing, families and the grieving process. There is a great deal to process and I am still doing so several weeks after seeing the film.

Forgive me saw the film and thought I’d sit on it for a short time to find the words to give the film a kick ass write up, but the longer it’s been the more I am turning it over and wondering about the things that the film kicked up. I have not sorted anything out but I am still working on it.

As with most great films I don’t have words, only ponderings and the notion that I need to keep working on a film I can’t let go.