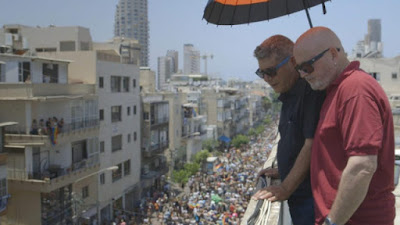 This magnificent documentary allows six gay men living in Israel to recount  what it was like being gay before it was allowed and how the gay rights movement, and trips abroad, changed their lives.

There have been a number of films over the last few years that have explored h the gay rights movement in the US changed lives. This is the first one I've run across about life in Israel and it is a charmer. This is a perfectly told film about what it was like for these men to be gay in a soiety that labeled them as criminals and sick. Its one of the few films I've run across where there you get a real sense of how it felt to be an outsider and how the discovery of other people like themselves hanged the world for the better.

The best part of this film is it showed me a bunch of guys I want to hang out with. I want to sit and talk to these men and have them tell me stories, not just about being gay but about life. I love any film where we are introduced to people that are so damn interesting that you just want to sit and shoot the breeze with them. That is perhaps a statement that is not on point with what the film is about, but to me it makes the film greater because it reveals that the film is about life and experience not just being gay.

I love this film. It's an early favorite of 2022 and highly recommended.