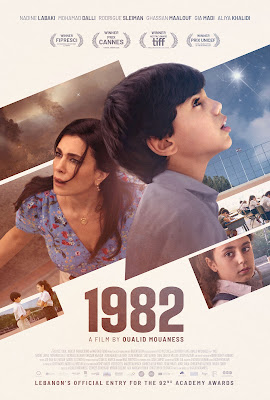 Taking place in a single day the film nominally is the story of an 11 year old boy who is going to confess to his crush his feelings for her.  While he is trying to handle it as best he can and without the interference of his friends, events outside the playground are taking a darker turn. Lebanon is being invaded by Israel and all of the adults are trying to go through their days while waiting to see if the war will touch them.

Kudos to director Oualid Mouaness who perfectly balances the various levels of the film. While we are sucked in by the wonderful cast of young actors, who make us want the path of romance to go smoothly, we are also held on the edge of our seats by the very real intrusion of impending warfare. We desperately want this all to go well for everyone…even though forty years on we know the war will scar the country.

I am in awe of this film. A couple weeks on since I saw the film I’m still turning the film over and over in my head, not only revisiting some characters who are now part of me, but also trying to work out how Mouaness  managed to construct such a perfect film.  It’s a film that is both light and heavy and sweet and bittersweet at the same time. Rarely have I ever seen such a perfectly modulated film. Seriously every tonal shift, even the final one is dead nuts perfect. At every tune I wanted to shout at the screen “Yes! Exactly”

While there would have been no way that Mouaness could know what was going to happen in Ukraine, the all too real war that we can’t escape reminds us that this is not a film  about decades ago, rather it is a film about the here and now.

!982 is a masterpiece and is highly recommended.