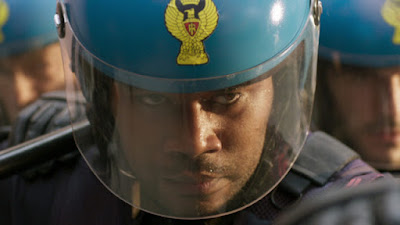 The only AfroItalian member of the police force is forced to ponder his place in the world when the police are asked to remove the squatters living in a certain building. The building is the one where he grew up and where his parents still reside. It leads to conflict not only with himself but with his brother.

Solid drama looking at questions of race and the place of immigrants with in society. While the film specifically speaks to the situation in Italy there are also threads that reach out across the globe as police officers of various races and ethnicities are being forced to participate in actions that might cause them problems with in their ethnic group.

I really liked this film a great deal so much so that if I had to quibble about anything concerning it it is the fact that it is a much too brief 80 minutes.