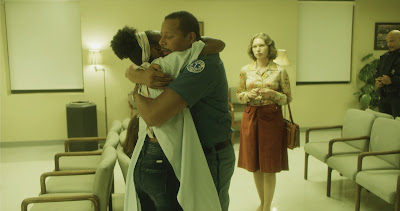 A retelling of the summer leading into the forced desegregation of the Boston school system in 1974 is turned into a story of various families effected by the change in particular two young women, one the daughter of a white cop and the other the daughter of a black medic.

While the THE WALK is most certainly heartfelt and is in no way a bad film, it never manages to  generate much genuine emotion.  I liked the film and I watched it from start to finish, but at the same time I never was fully engaged. Yes the filmmakers try their best but in taking a huge story and reducing it to a human level, usually the best thing to do with a story, they lost the connection to life.

The biggest problem with the film is that the film feels a bit too artificially constructed. Every side is covered and the characters don’t feel real so much as the films standard bearer for  a white student or black student. Most of the characters seem rather free of conflict in their thinking and behave according to their type. Its not bad but it feels more like a TV movie of the week from the period instead of film from today. It doesn't help that the budget wasn't larger because the events depicted were earth shaking on a huge scale. There were large scale riots inside and outside the schools and the film never really gives us a real sense of the scope.

On a technical end the clothing and props look right but not lived in and or used.The result is very much a feeling that the proceedings are all dress up.

To be honest despite my brickbats the film isn't bad. I did enjoy it. Ultimately the problem is  that there is enough good here (The cast is excellent) that I can't not unsee the the things that keep the film from being great. Its good enough that I want it to be great- a line its so close to.

Worth a look, especially if you can be forgiving.