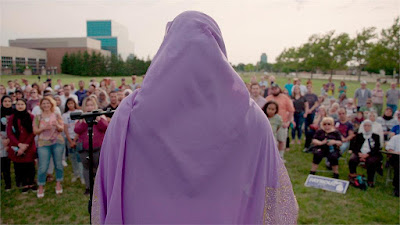 This is a look at what it is like to be a Muslim in the United States over the last four plus decades in the words of the people who lived it.

I was crushed by this film. That anyone would want to come to the US and stay with all of the abuse that is thrown at them is mind blowing. The level of stupid hatred thrown at good people is frightening. As one person recounts early on, they were being called racial slurs for a different group of people because the person doing it didn't know the right ones.

My heart broke. This film documents a national shame and we are all called out by it.

The truth of the matter is the people in the film and millions like them are still here and still persevering despite the racist feeling. This is a hopeful sign. Perhaps by remaining and meeting haters they can change the world.

Actually what is hopeful is the fact that this film exists. In doing so there is a chance that it will be seen by someone who hates blindly and perhaps they can be changed. I am hopeful that someone will see this film and be changed for the better.