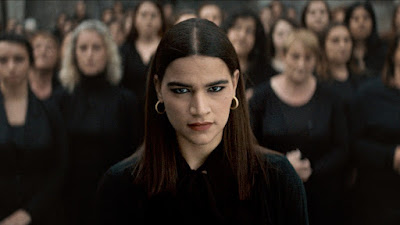 Rosa has spent her life in a small town in Calabria. She has lived with her grandmother since her mother died many years earlier. Now a full grown adult she still has no idea what happened to her mother or why.  Deciding to investigate she runs smack into the Ndrangheta , the local crime syndicate.

This is a great looking and moody thriller that has style to burn. This is one of those films you'll want to hang on your wall. Its a film that visually grabs you and drags you along all the way to the end. Its a beautifully acted film where the performances circle being iconic.

I really liked this film a great deal. Its a hell of a ride of the sort that they don't make any more. Its a revenge tale that owes much to films like the finest noir films along with westerns like Estwood supernatural westerns with echoes of BAD DAY AT BLACK ROCK. The result is something one of a kind and really special.

One word of warning, towards the end of the film, as the emotions get cranked up some of the performances can be seen as a bit over the top. There is a bit of literal hand wringing that kind of borders on being silly. If Francesco Costabile's  direction wasn't as tight as it is this might have become silly, instead it ends up being kick ass. Trust me- the final images made the hair up on my arms stand up.

You have to see this.