Ariela Rubin on A SEXPLANATION (2022) 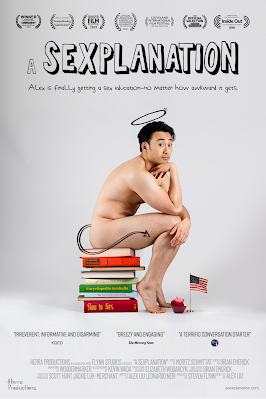 Sexplanation is a fun documentary, about you guessed it! Sex. Sexplanation follows a gay 36-year-old named Alex Liu who goes on a journey to uncover all things sex - from sex education, to the shame surrounding it. He speaks with psychologists, sex researchers, a priest, a governor, and even his own parents to learn more.
The film's main objective is to encourage more information and non-judgemental conversations with children about sex, by parents and educators, rather than just teaching abstinence and shame. This documentary is made with humor and it was a lot of fun to watch! It has a perfect runtime of 76 minutes.
I would recommend this doc to everyone. Alex Liu’s comedic sex education documentary Arrives on TVOD June 7 On all major streaming and cable platforms in the U.S. and Canada
Posted by Steve Kopian at June 06, 2022