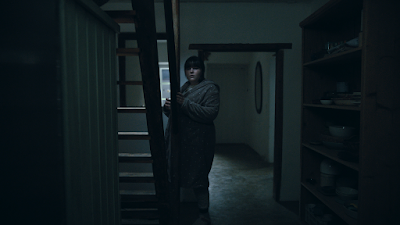 Simi is a young woman who is concerned about her weight. She goes to visit her aunt around Easter. Her Aunt is nutritionist, and she begins to help her with her weight problems. However things aren't smooth. Her cousin has aggression issues and there are questions if she should stay for Easter.

This film has mood to burn. Director Peter Hengl has made a creepy unnerving film that grabs you from the first frame and holds you staring blankly at the screen waiting for something terrible to happen. This is one of the best made horror films I've seen in a while. Its so creepy that I don't want to look at some of the stills from the film since they make my skin crawl.

For the most part this is a solid entry into the folk horror sub-genre.

I'm not going to go into details  but I do want to say that as good as a director Hengl is his plotting isn't quite what it should be. While he has made a compelling film the tension kind of dissipates at a certain point when you realize into which territory is heading. While we may not get how it ends the film signals a bit too early what some of the twists are going to be.

Reservations aside I like the film and horror fans are going to eat it up.