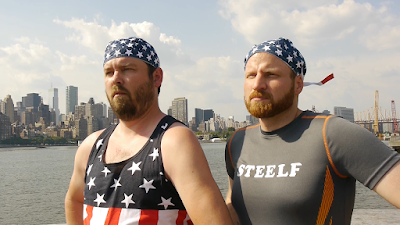 This is the story of Joe Pickett and Nick Prueher   who are best known for touring the country doing the Found Footage Festival. That’s where they show clips from industrial, instructional or WTF found video tapes and DVDs and providing commentary. They also pull pranks such as going on local TV news shows as cooks of strange dishes or as Chop and Steele, a strong man duo. It was there appearance on one show as Chop and Steele that resulted in them getting sued when the prank was discovered. The film is nominally about the lawsuit.

While the film has a number of amusing moments there was a point about 35 minutes in when I suddenly realized this film really doesn’t have a point. Yes it’s a rambling bio of some niche celebrities, but there is no real reason for it to  exist. I mean the film never really focuses on anything other than the guys in a random scattershot manner. There really isn’t a point to it. I mean I walked out of the film wondering why I had just wasted an hour plus on this nonsense. Yes its amusing but any sort of effort to give what the pair is doing with their pranks a deeper meaning is like trying to shine a turd. Yea it makes something look pretty but it’s still a turd. I stopped caring and kept thinking I would rather have gone to see a full evening of just the Found Footage Festival.

Honestly the film isn’t bad, but unless you love the guys there is  nothing here you need to waste 80 minutes on.