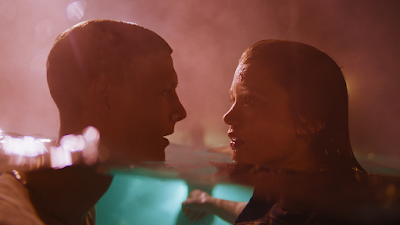 Chain smoking teen girl feels like she is an outsider. Her parents are divorced and her mother is never home. She feels as though she doesn't have any place to belong. She falls in with the wrong crowd and falls in love with the wrong guy. She soon finds herself falling deeper and deeper into trouble.

Been there and done that drama has several brilliant moments such as late in the game declaration of why our heroine is is going to stick by her men simply because he doesn't make her feel like shit, but mostly it doesn't do anything we haven't seen before. This is largely a two hour film that looks and feels like any of a half dozen similar films I've seen in the last year.

Though the one thing that makes it stand out the smoking in the film.  Cigarettes are minor plot points as they are trade and lights are bummed. This all might have worked except no one really ever finishes a cigarette. In every scene  everyone always has a new cigarette. Its as if every one got a new cigarette with each take. Having grown up in the time when everyone seemed to be chimneys,  it feels unreal (and is a clear sign the cast doesn't smoke). I know its a minor thing but it pulled me out of the story and made it all unreal.

Despite looking good and having a game cast  the script just never allows the film to generate  more than the occasional flash.