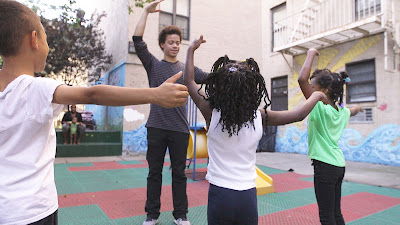 LIFT is will make you feel good.

Shot over ten years the film is the story of dancer Steven Melendez who returns to the Bronx homeless shelter where he spent several years as a child and where he was introduced to ballet in a workshop. Nearing the end of his dancing career Melendez  felt it was time to mentor the next generation.  We also get a peak into the lives of several children who go into the same program.

Transcending the subgenre of films about arts making a difference in peoples lives in order to reach the rarified air of truly great films of any sort, LIFT manages to move our heart strings by not only showing us a lot of things we’ve not run across before but also managing not to fall into the trap of cliches. It is also a killer portrait of the kids we meet along the way.

While the film is very much focused on the dancing the film is also laser focused on the problem of poverty and homelessness.  Melendez and the kids we follow grew up in shelters. As much as dance is an escape the homeless life leaves scars. When Melendez returns to the shelter for the first time in years he faints from the emotion of returning to a place and a time in his life of great stress and trauma. It’s a moment that transcends the typical homeless doc since it makes clear the damage not having a place to live causes.  We also get to see how Melendez’s interactions with the children help him heal and how his return to the shelter gives the children hope that they too can escape.

I was moved.  I was moved not because the film manipulated me but because I fell in love with everyone on screen. It was a joy to spend time with them and watch them grow and change.  While I could say I wanted to know a bit more about Melendez away from the dance world, it’s a minor quibble from a dyed in the wool nitpicker.

LIFT is one of the great joys of Tribeca and recommended