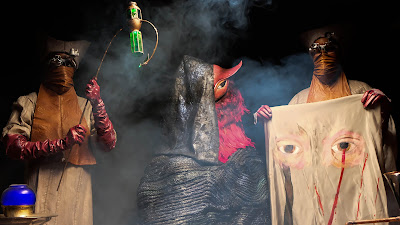 I must admit that I might be one of the biggest Travis Stevens fans. His aesthetic gets me every time. The boundary-pushing in sound editing, practical FX, and color saturation are things of beauty. The man knows how to write iconic feminist leads. Understanding how much I love Girl On The Third Floor and Jakob’s Wife is paramount. His latest film premiering at Tribeca 2022 is called A Wounded Fawn, and it pains me to say it confounds me. Let me explain.

The first half, or Act One, as indicated by a dramatic and beautiful bright red title card, is classic throwback magic, dirt filter included. Going into the film, we understand the setup. Bruce is a suave art dealer who invites gallery curator Meredith away for the weekend at his secluded cabin. From the second scene, we know that Bruce is also a serial killer, and poor Meredith is about to be added to his “special” collection. The opening of the film features a specific sculpture of Greek mythology. That piece will come to haunt our characters in a very literal way.

First, let’s talk about the best parts of the film; the performances. Sarah Lind (Jakob’s Wife) and Josh Ruben knock it out of the park. Lind navigates the cringe and slyly aggressive overtures of Ruben’s Bruce. She walks an incredible line between submissive and badass. Her fight or flight instincts will have you yelling at the screen. Ruben, whose film Werewolves Within is one of my favorites from last year’s Tribeca Film Festival, owns this role. He’s creepy as fuck. There’s no other way to describe his nature. Bruce is peak Stevens’ calling card. Ruben doesn’t play the over-the-top premise for laughs but lives in the madness. I sat through the credits and relished in his endurance of that take. When you see it, you’ll understand what I mean.

Now, let’s discuss Act Two. I found myself confused during this act. I thought maybe I was missing something, or it was over my head somehow. But, no, it’s meant to be a Greek tragedy akin to Agamemnon or Hippolytus. The film is such a departure from Stevens’ first two films that it’s hard to believe they’re by the same person. Can I respect that he’s trying something new? Yes. Did I love the dozen or so specific visuals in red? Absolutely. Was the hyper-augmented sound editing fucking stellar. You’re goddamn right. The payoff of the final laugh-out-loud line of dialogue wasn’t enough to make up for the second half of the film. A Wounded Fawn most definitely lives up to its Midnight section category. It’s the type of film you’d find in the late 70s at a theatre that exclusively shows cult films in the wee hours of the morning. Yet, here I am, needing to talk about the film ad nauseum. For that reason, Travis Stevens has, sort of, done it again.