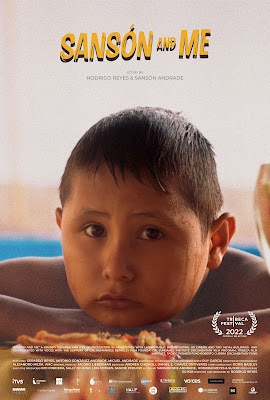 Director Rodrigo Reyes met  the man named Sanson while on his day job as a translator for the court in California.  Sanson, an undocumented immigrant, was charged with murder. Over the course of the trial Reyes wondered how the system could take a life and throw it away. He came up with the idea for a film of Sanson's life, and over the course of years through visits and letters a film was plotted. Because the authorities wouldn't let Sanson be interviewed on film, Reyes used the letters as a guide and recreated Sanson's life using stand ins and friends and family of Sanson.

I'm not sure where I should begin. Perhaps I should say that SANSON AND ME will kick you in the gut. This film transcends expectations by being a humanizing look at the immigrant experience, our criminal justice system and life in general. It's a film that closes the distance between us and the other people in the world.

I truly love this film a great deal because it takes all the headlines, all the other documentaries and all the stories you have ever heard about being an immigrant, about being illegal, about being the wrong skin tone, about being poor  and every other thing you have ever head in a tale like this and it gives them life. This film takes those stories and plays them out before you. Not only that because it it told with Sanon's words to a friend the story doesn't have distance. Sanson and director Reyes are making you a remember of the family. The story plays out as if it's your favorite relative telling you about their life and the terrible things that happened to them.

The walls are gone. There is no distance. For the first time a grand "ah ha" moment happens where you suddenly know something and your world changes. While these truths will be clear to anyone in a similar situation, to those who are not  poor migrants with questionable legal status and the wrong skin tone this film is going to be a eye opening.

I don't know what to say. I saw this film a couple of times in the four weeks before it premieres and I was left staring at the screen each time.

One of the most important films at Tribeca 2022 and a must see. 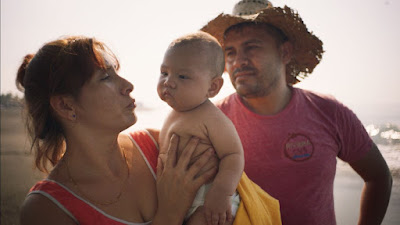