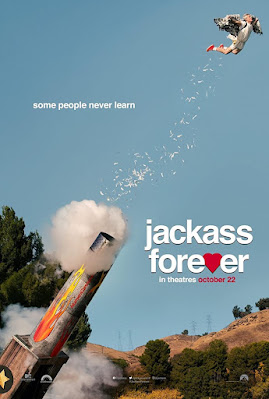 Johnny Knoxville and the gang are back with what is being billed as the final go round of stupid human tricks is the best of the bunch. It’s a fitting send off for a series that makes it clear you should not try any of the ticks we see on screen.

You either love this sort of thing or you don’t. If you watching people get hurt for laughs you are going to have a grand old time. If you don’t, and if you are bothered by male genitalia then this film is not for you.  That’s about the only way you can critique this film.

The reason the film works as well as it does is that this is the first film in the series where the spaces between the stunts are enjoyable unto themselves. This was the first time where I wanted to watch the whole film and not fast forward through the talky bits.

For what its worth if this truly the send off of the series it will be missed. If there is more coming I hope its sooner since the thought of  old guys in wheelchairs doing weird things with medical devices is kind of scary