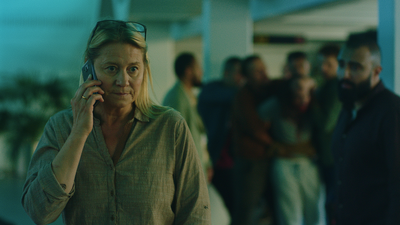 A doctor accompanies a prisoner on a forced rendition home to a country he was trying to escape.

A mother takes her daughter to the sea side

A couple try to have a tryst in an rented house

A couple attend a funeral and are forced to contend with the husband’s past.

Buckle in it’s going to be a bumpy ride.

Actually brace yourself because you are about to have the shit kicked out of you emotionally.

This film has the five unconnected stories intercut with each other in order to build a heady and emotionally powerful look at notions of trust in our lives. It’s a harrowing and troubling ride that will make you wonder about all of your relationships. I mean after this film I’m questioning if we ever know anyone or if we should trust them.

The film doesn’t shy away from easy answers and as a result we really have to seriously consider what we are witnessing. As the end credits rolled I sat staring at the screen trying to process it all.

Everything about this film is great. The cast and everyone behind the camera have crafted a masterpiece of emotional turmoil