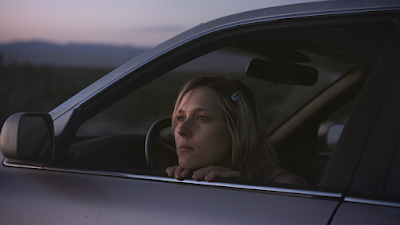 Roving Woman starts off with a woman named Sara being kicked out of her home by her boyfriend who she lives with. She's dressed up in a dress and heels. She bangs on the door and rings his buzzer, but to no avail. We never see the guy and we never find out what transpired between them.

What follows is Sara on a drive through the desert and the various people she meets along the way.  What this film really is about (or what I think it's about) is a study of isolation and loneliness. This movie is slow and there isn't a ton of dialogue. Even when Sara meets various people, she doesn't say much and never tells anyone the truth about who she is or her story.  There were some strange things about the film- at one point Sara meets a group of guys, but the film never shows them, and instead focuses on an empty car. I'm not sure why they chose to do this.

To me, this movie wasn't anything special. Maybe I'm not deep enough of a person to get it, but I wanted more- more dialogue, more conversations. I didn't really feel anything for this film or really care about Sara.