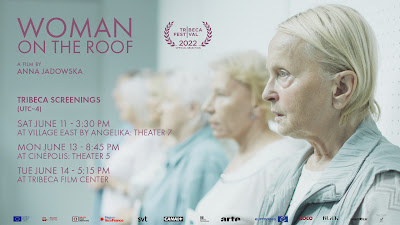 WOMAN ON THE ROOF is being mis-described. The Tribeca Film Festival talks about the an older woman trying to rob a bank, and while that happens that’s only a tiny part of the film. The reality is this is the story of a woman of certain age trying to find her place in the world. It’s a beautifully acted low key film that is going delight those who like solid dramas and thoughtful character studies.

To be honest I wish I had not seen it in the middle of a festival. I know that seeing it as the 52nd film at Tribeca worked against my absolutely loving it.  I mean Dorota Pomykala gives absolutely seismic performance making this a moving film  but in the crush of other festival films it was over whelmed. This is one of those films where I know I will have to revisit it. Its something that happens at festivals where you are seeing so much that smaller films get pushed aside because you’re so hyped up trying to see as much as you can you can’t give some films the thoughtful contemplation the film deserves.

I know that WOMAN ON THE ROOF is an infinitely better film than what I feel for it right now. I say that know that when the fest is done and I can catch it again down the road I will.

On the other hand since odds are you will not be seeing as many films as I have been seeing for the fest, and if you love great performances and quite dramas that kick you to the curb then see WOMAN ON THE ROOF when it plays Tribeca again