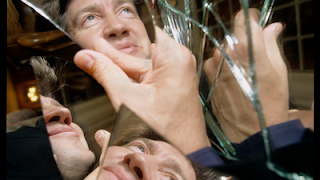 The film is a series of essays on the influences of the Wizard of Oz on the films of David Lynch.

This is  kind of like watching a series of between the film pieces on Turner Classic Movies on the same subject for  two hours. Some are better than other (The John Waters one is excellent) but they all suffer from the repetition of images and ideas.

As interesting as some of this is the film made me ponder the whole doc subgenre of dissecting all the obscure reference in a directors films.  Why are we doing it?  Yes OZ influenced Lynch, but isn't it more important what he is doing with the themes? On a larger level isn't more interesting with what the filmmakers are doing with the things they have seen.. I mean we don't investigate the brick in a building.

Personally I find these essays that look at the tiny details serve little purpose other than to make the creator seem intelligent since they get to dazzle the audience with all they things they know....

This is an okay film that is best for Lynch fans who have literally seen every film he's made.