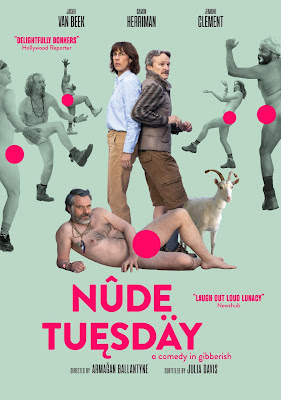 Nude Tuesday is a perfectly fine 10 minute sketch stretched to a much too long 100 minutes.

The film is the story of a couple going through a rough patch. They are given a vacation in a couples retreat where they can try to reconnect. The whole thing is told using a jibberish sort of language that is intentionally awkwardly translated by subtitles.

I lost interest in Nude Tuesday rather fast. The use of jibberish doesn’t seem to serve much of a purpose past the first few minutes. There is no reason I can think of for it to be that way except to allow for the intentionally wonky subtitles which after a while cease to be amusing. I mean why not have them just misspeak? The jibberish also results in some awkward moments when the nonsense sounds like actual words such as when our hero gets into a fight with a black man and seems to call him the “n word” when he’s tossed into the street.

Your tolerance for the film will be determined by your love of uncomfortable humor. Much of the humor comes from people being in uncomfortable situations. The uncomfortableness comes from the hero of this nonsense being not particularly likable and tending to make things that way.

While I have no problem with nudity, I’m always suspicious of any film that has to tout the fact  it has full frontal nudity since it often is a desperate attempt to get people to see the film who might have tuned out. Honestly based on the humor level and the nudity I’m of the opinion that the filmmakers are reasonably intelligent five years still hanging out in the playground.