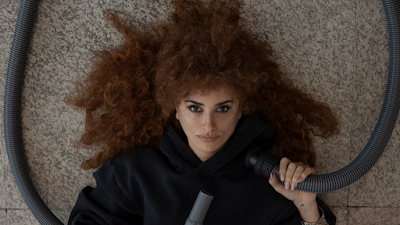 A billionaire desiring to leave something behind hires a quirky director (Penélope Cruz)to make a movie of a prestigious film. Along the way she hires a matinee idol (Antonio Banderas)and respected stage actor (Oscar Martinez) to play brothers. As the film plays out we watch the competition from the actors as they try to deal with the weird demands of their director.

Biting comedy skewers the film industry mercilessly as well as all artistic types and those wanting to buy a good name. This is a laugh out loud funny film that both enlightens and horrifies. Its a beautiful thing.

Why this wasn't a fall release when it could be fresh for multiple Oscar nominations is beyond me. Cruz is at the top of her game disappearing into her role and her hair in possibly her best performance. Banderas is equally great as a big star with a big ego. Its a role which reminds us just how damn good he is.

While I could wax poetic about everything in this film I have to mention the script. Its perfect. No turn is out of place. It messes with the audience making us think it will go one way only to go the perfect way instead. Every god damn turn is perfectly earned. This is scripting on a godlike level.

This film is a masterpiece and an absolute must see.