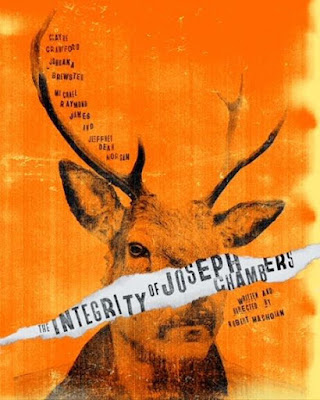 A man relatively new to hunting goes into the woods alone and then something happens.

Robert Machoian the man behind THE KILLING OF TWO LOVERS returns with THE INTEGRITY OF JOSEPH CHAMBERS. I say that right at the start because if you are a fan of that earlier film  then this film is for you. If you didn’t like the earlier film then odds are this film is not for you.6/14 8PM

This film is largely a one-hander. Clayne Crawford is the star of the film and he is pretty much all alone on screen for the entire time. It’s great performance that is helped immensely by Machoian‘s insistence on letting things play out in long takes.  We get to fall down the rabbit hole because the camera just observes and doesn’t cut away. We are in the moment and it messes with us. In part we are forced to experience what Crawford does in “real time” but also because by not cutting away we are being forced to truly consider what the implications of it all is. We are left to stew in the  moment without moving on, without being distracted by the next shot or the next turn.  Its  quietly crushing as events get under your skin.

If you are willing to go with it the film is a stunner.

I should point out that I saw this film back in May on the evening following the shooting in Texas that left 19 children dead. To say that what happened in real life intentionally and what happens in the film accidentally made for a tough evening of viewing and contemplation.