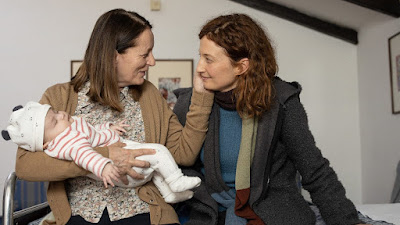 Nanni Moretti's  adaption of Eshkov Nevo's novel is a decidedly uneven affair. The film is the story of three families living on three floors of the same apartment building in Rome. One story is the fall out of the arrest of a couples teenage son for a drunk driving accident, another is the friction caused between a couple in the wake of the birth of their daughter and the third is the story of a conflict between neighbors over potential abuse.

Well made and well acted, as all Moretti's films are, the film doesn't really come together in a fully compelling way. This is a film that should have been a mini series with each story not being as fully fleshed out as it should have been. It doesn't make the film bad, rather it simply makes the film less than it could have been. Do understand that I am quibbling here because what is here is choice, and good enough that I want more.

If my words make you hesitant to try the film, might I tell you that the film has two stunning sequences that make the film worth seeing. The first is the opening where the car accident happens and is so well done it will make you gasp. I had been told about it but it still is a killer sequence. (its so good  in fact the rest of the film can't compare to it). The second is a dance sequence late in the film that is both out of left field and charming.

While I like THREE FLOORS and can recommend it, I don't think it's one of Moretti's best. Then again lesser Moretti is better than many filmmakers best efforts.