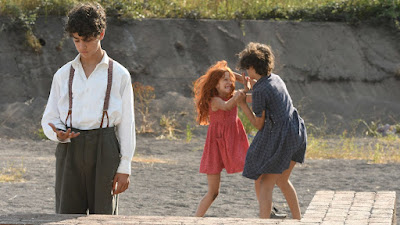 Paolo Taviani's first solo film since the death of brother is a kind of an odd duck film. While it's beautiful and has it's moments I'm not certain it all hangs together.
The first hour or so of the film is firmly focused in the death of author Luigi Pirandello in 1936 and the efforts of his family to get his ashes to Sicily for burial. Its a beautiful black and white tale that meanders all over the place but doesn't seem to add up to much beyond a footnote. The last third of the film is an adaption of Pirandello's final story called The Nail which is about murder in New York City. Its a beautiful little tale that never really connected up to the rest of the film.
This is a magnificently made film that seems to be incredibly personal for Taviani. Dedicated to his late brother the film feels like a message between siblings more than a message for the world. While normally that would doom most films, this is a work from a master director and it is still a stunning achievement by any stretch. Taviani's work has always been head and shoulders above most other directors so his least films are better than most directors best.
I may not have gotten all should have out of it but I enjoyed the ride.
Recommended.
Posted by Steve Kopian at June 10, 2022