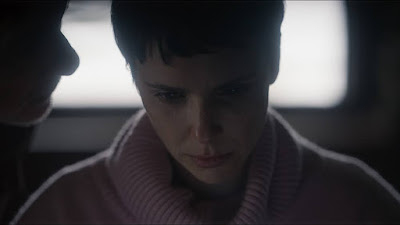 Ana is a writer who has been accepted into a prestigious workshop located high in the mountains. She wants to try and finish the novel she is working on (the title of the film is the title of her novel). While she was aware that the head of the workshop does some odd things she is not prepared for what happens as she and the other writers are pushed to become their characters.

Literary thriller  is one you will have to pay attention to. Its not so much that it’s complex, rather it’s this is a film Where what is not said or what people are doing  rather saying is important. I looked away a couple of times as I was making notes and I realized that I missed something. I mention this because the film is making it’s World Premiere at the Brooklyn Film Fest as both an in person and virtual screening. If you can’t see this on a big screen (which I recommend because it’s a starkly beautiful film), then clear the decks and turn off your cellphone and just watch it with no distractions.

This is a beautifully acted film. While the film focuses on Débora Falabella as Ana, the rest of the cast are just as important and they all sell their roles perfectly. The cast is a perfect ensemble and they all help to pull you into the proceedings. They make us feel like we are tramping around the spartan rooms of the mountain top retreat with them.

A slow building thriller rooted in reality. While there are big moments as the various characters spin out, its always the sort of thing that never feels over the top or there just for a big moment. The result is a film that leaves us feeling exhausted and frosty by its conclusion. (I dare not say more lest the thrills be lessened)

This is a small gem of a film and very recommended.